Prehistoric people in the Southwest carefully watched – and marked – the sun and seasons.

Here’s a great example: On summer solstice at Fajada Butte (in Chaco Culture National Historical Park), a vertical shaft of light – now known as the sun dagger – passes through the center of a spiral petroglyph.

This was no accident. For prehistoric people, tracking the movement of the sun was serious business. For example, the vernal equinox might indicate that it’s time to plant seeds. 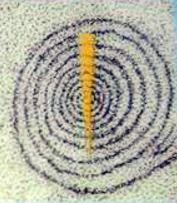 Like our ancestors, I tend to pay attention to the movement of the sun and changing of the seasons.

While searching for information on the upcoming vernal equinox, I ran across this sentence on the website TimeAndDate.com:

As a copywriter, I love the English language, and I love learning new words.

The above sentence kicked up my curiosity a notch, so I took a few minutes to expand my vocabulary.

Here’s a quick “sun and seasons” vocabulary test. See how well you do!

Vernal equinox and autumnal equinox – Also known as spring equinox and fall equinox, this marks the moment the Sun crosses the celestial equator (the imaginary line in the sky above the Earth’s equator). According to TimeAndDate.com, on the equinox, night and day are nearly the same length (12 hours) – but not exactly the same length. The word “equinox” is derived from Latin, meaning “equal night.” The equinox happens every year on March 19, 20, or 21 and on September 22, 23, or 24.

TAKE NOTE:  You can sprinkle these words into your everyday language. Per Dictionary.com:
– Zenith: “a highest point or state; culmination.”
– Nadir: “the lowest point; point of greatest adversity or despair.”

Zenith and nadir – Pretend you’re standing on the equator at high noon. Directly above you, the sun reaches its zenith – its highest point. Beneath your feet is the nadir, which is diametrically opposite of zenith.